The Two-Step Approach To Killing Odors And Their Source

Smell is so much more than just a biological experience. It is and always has been a societal and cultural phenomenon. And while wonderfully fragrant scents have always been welcomed and enjoyed, malodorous ones, and the ability to control them, has been the bane of human civilization since the dawn of time.

Ever since Bob Surloff, founder of Air-Scent International, invented the first fan air freshener in the mid 1940’s, the advanced science of controlling bad odors in commercial interiors is and has been our passion. Since then, we have been developing and producing some of the most effective vaporous, odor neutralizing products in the marketplace.

While true odor control can take place via vaporous odor neutralizing solutions; it’s wholly effective when it also takes place at the source. Consequently, we’ve spent the better part of seven decades solving this fetid dilemma, and the results speak for themselves.

Read on to learn more about this stinky subject as well as an overview of Enz-O-Matic and Mega-Fresh, two products when used in tandem, effectively eliminates both airborne odors and the nasty route causes they emanate from in areas where strong odors persist such as: recycling centers, trash rooms, stairwells, elevator shafts, crawl spaces, soiled linen rooms, basements, attics, pet kennels, storage facilities and more.

During ancient times, the opening of trade routes between the Mediterranean Sea and the Middle East exposed Greek and Roman populations to exotic aromatic spices and scents such as jasmine, rose, iris, lavender, violet, and chamomile.

The aromatic spectrum also included spicy aromas derived from the odors of natural materials such as yellow amber, camphor, and cloves. Scented powders made from talc were carried in fabric sachets, and garments were sewn from fabrics steeped in perfume.

Bathing rituals were very popular during the glory days of Rome and they were performed both socially and for religious purposes. It was quite common after a soak for the body to be anointed with scented oils and they were sometimes carried in small bottles secured around the wrist.

The emperor Nero was known to disperse rose water at special ceremonies and banquets. Romans were so obsessed with masking their personal body odors that they took that idea even further and doused their clothes, their horses and even their pets with fragrance.

During the Middle Ages, pigs were left to run amuck in European cities to eat the garbage left by citizens. Today, thank goodness, odor-control methods have become much more polite and customized to the needs of modern commerce and society. The issue at hand, namely, the need to keep odors at bay on our bodies, in our homes and work places, remains unchanged down through time.

Our scent pioneers at Air-Scent initiated modern ambient air-care. Before garbage collection, the development of modern sewage systems and other waste control standards were established some two hundred years ago, malodors were unpleasant but acceptable elements of everyday life.

Toilets existed, but privies were more common in American homes and offices until as late 1914. The most commonly used air-freshener was incense and restroom odor-fighters included hand-operated atomizers, scented salts, soap cakes and even mothballs. These applications are still in use in rural areas to this day.

Today, the world needs modern tools to accommodate the growing sophistication of our cultures and the increasing complexity of our malodors. We are a family-run business dedicated to odor eradication and ambient air care that has been in continuous operation since 1948.

Both a leader and pioneer within the ambient air-care industry, we are renowned for its impeccable customer service reputation, superior products and masterful ambient scenting and marketing solutions for all types of commercial enterprises.

Our specialties also include sustainable and cost-effective environmental and odor strategies. Innovative scent diffusion technologies developed in our 85,000 square-foot Technology Center located in suburban Pittsburgh are the most advanced within the world of industrial science.

Modern companies, no matter what their product or service, are not so much concerned with covering up or masking odors, but rather establishing a controlled and effective method to neutralize and destroy them forever.

We are one of the most prominent manufacturers and distributors of the finest air-freshener dispensers and 30 to 60 day refills in the world today. Our ambient air-care products are sold everywhere to tens of thousands of customers via their route service operators and distributors. 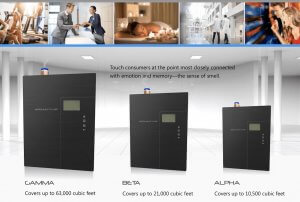 We offer a vast array of highly effective odor control products for use in many commercial environments of all sizes including but not limited to: stairwells; trash rooms; compactors; hallways; elevators; under bathroom sinks; cruise liner pet kennels; salons and spas; gyms and fitness centers and large public bathrooms.

The two most powerful are almost always used in tandem; namely, Mega Fresh and Enz-O-Matic. Both kill lingering odors and eliminate them at their source in diverse ways, but together they are a force no odors can overcome.

These diffusers are equipped to deal with the most intense malodors, no matter where they may appear. Their Patented Flow Science capillary technology insures that fragrance flows into narrow spaces without the aid of gravity or other external forces. Inter-molecular energy between the liquid and surrounding solid surfacescauses this action occur. Its power, which controls tough odors for up to 30 days, is compounded by the use of fragrances that are laced with Metazene.

These diffusers are both attractive and energy-efficient, as they require no batteries or electricity of any kind. They work silently and are easily customized for each specific need. They are most efficient in those areaswhere strong odors persist such as: recycling centers; elevator shafts; crawl spaces; soiled linen rooms; basements; attics and storage facilities.

This highly efficient odor annihilator is a concentrate that contains over 200 billion non-pathogenic, multi-strain, live bacterial cultures per gallon. This intense concentration produces enzyme action that attack and degrade organic wastes, which are defined as any materials that originate from living organisms. There are many surface odors emanating types such as spills, pet mishaps, protein degradation, urine, emesis and excrement. Effluvium can be found in municipal, industrial solid waste and agricultural waste as well as green (garden and clippings) and wastewater, treatment facilities, lift station pump houses and landfills. It is also a term that can refer to animal and plant based material and degradable carbon such as paper, cardboard and timber.

Enz-O-Matic freshens the air via a unique amalgam of surficants, which are compounds that are known to lower the surface tension of any liquid in which they are dissolved, and fragrances that provide both instant odor-control and air freshening qualities.

This degrader and odor-neutralizer is well known for its ability to digest odorous organic residue surrounding urinals, toilets and sinks, and for its ability to remove uric acid salts and stains. It is also perfectly adaptable for use in floor drains, grease traps, drain lines, organic stains and septic systems, just to name a few.

Why Do These Two Products Work So Well Together?

The dual effect of using these two products together to fight malodors cannot be matched. Singularly, Mega Fresh controls vaporous odors lingering in the air. Enz-O-Matic, on the other hand, is applied to surface areas where odors originate such as: concrete and painted floors, which retain the malodors of spills and leakage of excremental and body fluids. Together, they are an unbeatable force against persistent malodors.

The Power Behind Air-Scent

Our humble beginnings date back to post World War II and the invention of the world’s first fan-operated air freshener dispenser. Our researchers and chemists are always at work, perfecting their skills and augmenting their knowledge via testing and on-site experience. We are the world’s leading authority on the subject of fan air fresheners, cutting edge linear scent diffusion technologies, fragrance development, molecular odor-control and top-of-the-line small and large-area HVAC (The Aroma Stylers) and Non-HVAC air diffusing systems (The Aroma Beam). 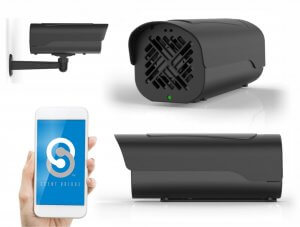 We manufacture our own fragrances and equipment and they deliver the most effective air care products and the largest selection of fragrance oils found anywhere in the industry. Our Technology Center is equipped with the most advanced cutting edge diffusion technologies that money can buy. This includes the latest innovations in: gas chromatography; mass spectrometry; headspace analysis; distillation; extraction and quality control technology.

No history of Air-Scent’s multitude of successful odor control products and solutions could ever be complete without mention of our most powerful odor neutralizer, Metazene. Although this compound has been around since the late 1940s, initially it was very difficult to prepare because it was volatile and reactive. It took many years to perfect a concentrate that was stable and pure.

This colorless liquid with a slight scent of witch hazel controls malodors at the molecular level, which sets it apart from others of its ilk. It is a matter of weight and chemical reaction, as the Metazene bonds with malodorous molecules, which in turn alters their electron patterns, and renders bad smells odorless. This occurs because very low vapor pressure causes the heavier, smelly molecules to sink and evaporate over time.

Metazene acts as an excellent fragrance fixative, and for this reason coupled with the fact that it contains no formaldehyde which is toxic to humans, animals and the environment, makes it versatile and intensely powerful as a weapon against combating persistent odors. Using conventional perfume sprays within commercial spaces, such as offices, industrial buildings and apartment complexes, temporarily masks bad smells from smoking, stale food and chemical smells but does not eliminate them forever.

So if you’re scent marketing company, work within, or supply to, the Jan San industry, or you own or operate any business in need of odor management, send us a message or give our team a call today and take advantage of our expertise and 2-step odor-control solution, which will transform any business enterprise into a much cleaner and sweeter smelling environment for both your workers and your customers.

Final thoughts on bad smells: “… A man who works hard stinks only to those who have nothing to do but smell. ~ Laura Ingalls Wilder

How do you get rid of lingering odors and smells?

An acronym for Heating, Ventilation and Air-Conditioning, HVAC scenting occurs when a fragrance is diffused through a central heating and cooling system. This is accomplished by connecting an Air-Scent HVAC scent diffuser to an existing system where it then disperses the aroma …

Nose blindness is perhaps somewhat explainable by an an old idiom that speaks of variety being the spice of life. Also known as olfactory fatigue and fragrance fatigue, this condition refers to the loss of sensitivity to certain odors after over exposure to them. On an average day in the …